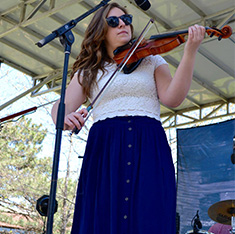 Amelia grew up in Corning, New York. From age three, she studied the violin using the Suzuki method. Not only was she a private student and a first chair violinist in her regional orchestra, but she also began singing, dancing and acting in lead roles for the high school’s drama club! The College of Saint Rose was where Amelia earned her B.S. in Music Industry with a concentration in Violin Performance. In addition to the rigorous course schedule, Amelia was the musical director of her award-winning A Capella group, Founder and Vice President of their student run record label, and member of multiple recording ensembles on campus. Although she was classically trained, her love of folk music allowed her to pick up fiddling, composing and ultimately join a touring band! She is very excited about the opportunity to teach lessons.