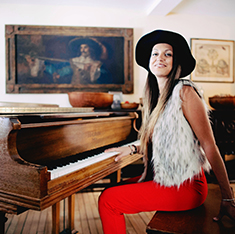 Belyana Mehiel (a.k.a. Bella Dorian) is a singer/songwriter, producer and multi-instrumentalist originally from the oldest city in Europe – Plovdiv, Bulgaria. She started playing classical piano at the age of 6. By the age of 16 she decided to pursue popular music in both piano and singing. Bella attended many singing competitions till she got accepted to Berklee College Of Music in Boston in 2014. She duo-majored in Contemporary Writing and Production and Performance. While in Boston, Bella played at the premier piano bar Howl At The Moon where she developed a big setlist and learned to play drums and bass. In December 2017 Bella won 2nd prize at the American Protege contest and got to perform at Carnegie Hall. Bella’s been playing with different bands all over New England and working on her debut EP “Boom” on which she is a co-mixing engineer and co-producer. In April 2021 Bella moved to Nashville where she regularly plays original music rounds as well as cover gigs all over the area. Bella believes that everybody has a little bit of music in them and it’s only up to the individual determination and passion, as well as the right guidance, to develop that little grain into a favorite hobby or even a career. She’s thrilled to get the chance to show you all the little tricks and lessons she’s learned throughout her musical journey that has spread on two continents for the past two decades.