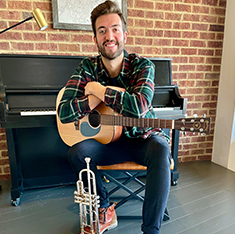 Cody Knapp hails from Hudson, NH where his love for music began when he started playing guitar and trumpet in middle school. While growing up, music quickly became his passion as he played guitar in various ensembles as well as trumpet in concert and jazz bands and was part of a group that played weddings, festivals, etc. around the New England area. Cody attended Belmont University in 2015 where he was an active member of the National Association for Music Education, played in the wind ensemble under the direction of Dr. Barry Kraus and Jazz Band 1 under the direction of Dr. Jeff Kirk while also studying privately with Dr. Joel Treybig. He graduated in 2018 with a BM in Music Education.

Cody has also established himself as a singer/songwriter and released his own EP and various singles since 2018. He continues to play shows in the Nashville area, playing his own music and trumpet for numerous bands.

Cody has a plethora of experience teaching individuals of all ages and skill levels. He finds it very important to be mindful of each student’s uniqueness and uses that to help them reach their full potential. He does this by holding students accountable while maintaining a relaxed learning environment and incorporating his own love for music.