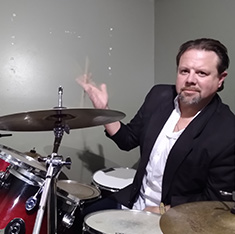 Jeff Nuckolls was born with the music bug in Memphis, Tennessee. Growing up, he was trained in the alto, tenor and baritone saxophones. When a drummer didn’t show up in high school, he began to train in percussion and ended up part of the snare drum line that took the Best Percussion award for the State of Tennessee.

Jeff has taught for years as well as studio work and touring. He has been in several touring and signed bands. Some of the bands he has opened for include Survivor, Cake, Tenacious D and Band of Horses.  Mr. Nuckolls and his family now happily teach and play out of the  Brentwood neighborhood in Nashville Tennessee.