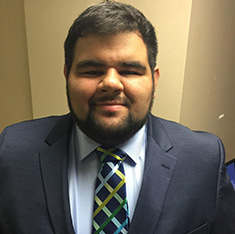 Johnathan Segovia was born and raised in San Antonio, TX. Segovia graduated from Tafolla Middle School and Burbank High School where he learned to play Tuba and Bass. Segovia has studied Tuba with the San Antonio Brass which includes members of the San Antonio Symphony such as Dr. John Carrol and Lee Hipp. Segovia also played with other youth ensembles such as the Youth Orchestras of San Antonio and Revolution Drum and Bugle Corps playing both Bass and Tuba. Segovia graduated from Texas Lutheran University in 2016 with a Bachelor’s Degree in Music. At TLU Segovia focused on studying Music Theory and composition as well as mastering Tuba performance and playing Bass in the university Jazz Band. After graduating, Segovia has been teaching Bass and Jazz at local community music schools as well as playing tuba and bass in community bands and choirs such as the San Antonio Community Wind Ensemble and the Live Oak Singers. Segovia is well versed and proficient in multiple genres of music and can play multiple instruments such as Strings, Brass instruments, Guitar, Bass, as well as keyboard and electronic instruments such as Piano, Synthesizers and Drum Machines. Segovia believes that it is the teacher’s sole responsibility to teach the student HOW to practice and not WHAT to practice so the student could have long term success in music. With the proper practicing technique, it will not matter what the student wishes to play, they will have the tools they need to conquer it.