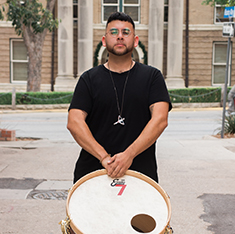 Joshua Alderete is a freelance musician. Joshua has been involved in playing drumset and percussion for over fifteen years in various ensembles and styles. He is a graduate of Pasadena Memorial High School. He performed with the Concert Band, Marching Band and Indoor Drumline, where He was the Drumline Captain his Junior and Senior year. After high school, Joshua moved to Tyler, Texas, where he received his Associates Degree in Music Education. Under the direction of Thomas McGowan, Thomas Mensch, Heather Mensch, and Dr. Steven Meier, Josh was a member of the Tyler Junior College Apache Punch Drumline as Section Leader. He was also involved in Kappa Kappa Psi; Honorary College Band Fraternity, percussion ensemble, the TJC Indoor Drumline that competed in Winter Guard International, and both Jazz bands I and II. While in the Jazz program at TJC, Joshua performed with recognized Jazz artist such as; Chris Vidala, Bobby Shew, Mark Mullins, Vince DiMartino, and George Faber. Here, Joshua cultivated a love for Jazz music, and started playing around the East Texas area. After receiving his Associates Degree, Joshua moved to San Marcos, Texas and is currently pursuing a Bachelors Degree in Music Education. In his time at Texas State, Joshua has been very involved percussionist in the Texas State Symphonic Winds under the direction of Dr. Kyle Glaser, Salsa Del Rio under the direction of Mr. John Lopez, and Jazz Ensemble under the direction of Dr. Utah Hamrick. While in the Jazz Ensemble, Josh has also played with Jazz artists like Steve Houghton, Andre Hayward, Joel Frahm, and James Morrison. Joshua has also worked with Butch Miles, honorary Jazz drum set player for the Count Basie Orchestra and many more famous Jazz artists. He is also involved in his community, playing drumset and leading at Sozo Church. Joshua Alderete is endorsed and sponsored by 7Drums Custom Drums, out of San Antonio, Texas.