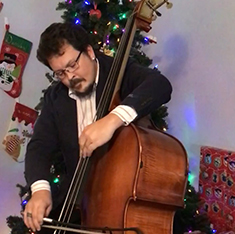 Mr. Joshua Lowe is a musician residing in San Antonio. He has been performing as a bassist within the local music scene between Austin and San Antonio’s local jazz and Latin dance bands. His performances with Cienfuegos and La Moña Loca, have had audiences salsa dancing in Austin, Texas since 2004. Since 2018, he has been seen around San Antonio as part of the Henry Brun International Trio, playing his Double Bass. Being a member of San Antonio’s Spies Like Us in the 90’s began a love for being onstage. He has also performed internationally with the world famous ska band, The Toasters from NYC, in which he performed in Columbia, Costa Rica, and Mexico.

Mr. Lowe has been a private lesson instructor teaching guitar, bass guitar, as well as double bass, and cello. After earning an undergraduate music degree from Tx State University in 2009, he began a career in our public school system as a TEA certified music educator. Extensive experience in the elementary music classroom led him to earn his certification in Kodály pedagogy from Texas State University. He has also successfully completed 2 levels of Orff pedagogy from Trinity University. After many years working in the classroom and having trained a dozen music teacher interns, Mr Lowe is reshaping his own future by pursuing a Masters in Jazz Performance from Tx State University in San Marcos, Texas.