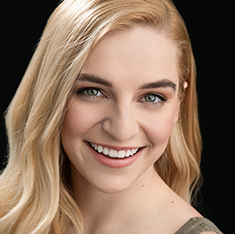 Rachel Zimmerman lives in Hermitage, Tennessee and is originally from Cincinnati, Ohio where she first found her love for singing and playing piano! When learning piano, she started with simple scales that then grew to complex melodies. Rachel also took voice lessons which helped her learn vocal basics and also worked musical theater and pop styles. She also recently received her Bachelor of Fine Arts in Musical Theater at Belmont University! During her time at Belmont, she worked with professionals on vocal technique and even studied in New York where she learned from the best in singing, acting, and dancing!