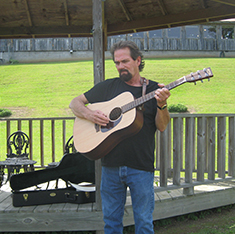 Truman Seago is better known as Mr. Tony by his students. Mr. Tony first started playing guitar on his 8th birthday. His Grandmother gifted it to him, since he was always getting hers out to play. He began taking lessons immediately, and as he got older, continued his guitar music lessons playing with local bands when rock and roll was first being discovered. He also came from a group of musicians in the gospel music world from his father’s side of the family. Mr. Tony come from a big music family, and his grandmother was even friends with Hank Williams and used to perform with him at the Stockyard in Montgomery, Al.

Mr. Tony has continued his music education throughout his whole life from different music schools around the United States, the most popular one being Berkeley Boston. Mr. Tony never made it to being a famous guitar player, but he loves teaching! Mr. Tony used to own a music school which would perform concerts through their own sound and stage company, as well. This school was a special needs music program where he taught kids with disabilities how to play musical instruments at no cost; he even furnished the guitars and supplies. This is something Mr. Tony really loves to do. He also founded an after-school music education program through Williamson county Parks and recreation in Franklin, Fairview and Longview, Tn. It was the biggest guitar school in Nashville for many years. Mr.Tony taught from his own published manuals on how to play guitar named “Anyone can play Guitar.” He was in the process proofing his manual for free at the public libraries in Williamson county when Mr. Tony was approached by one of the general managers for the parks and recreation department to start music lessons at the facilities. This was a dream come true for him!

Mr. Tony teaches students how to write music, vocal lessons, recording production, and all about performance. He also teaches music theory along with the mechanics and motor skills to make it a lot easier to play guitar. Remembering all the time that this is about helping someone to be happy, Mr. Tony believes music is very powerful and healing.